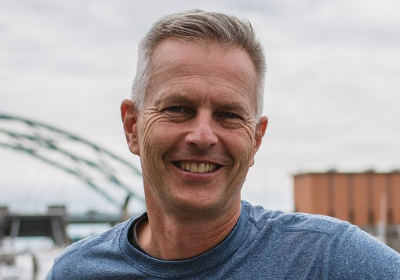 Doug Rademacher, lead computer science and information technology teacher at the Met School in Providence, Rhode Island has been named the recipient of the 2020 CS4RI/CSTA-RI Computer Science Education Award.  The award recognizes an educator who demonstrates a strong commitment to computer science education in their schools, districts, and communities.  Doug was selected through a competitive process that was open to all full-time, licensed K-12 teachers in Rhode Island who have at least 3 years of experience teaching and 1 year of computer science teaching.

Doug has been with the Met School in Providence since 2010. Prior to joining the Met, he worked in the IT industry, his last position being VP/CIO at Rhode Island-based APC. Over the past two years, Doug has developed the Met’s CS/IT program and established student internships at several local businesses and organizations. He worked with CS4RI this year to pilot a U.S. Department of Education funded work-based learning course which will be implemented in 10 schools next year. Doug is also a board member of Junior Achievement RI.

As the recipient of the award, Doug will be working with CSTA-RI and CS4RI to share innovative practices and pedagogy in computer science.